The Custer Institute and Observatory is Long Island's oldest public observatory (est.1927). Open to the public every Saturday evening from dusk until midnight, our staff of volunteers will give you a tour of the facilities and the night sky through our powerful telescopes. Custer has a library, museum, and gift shop. Frequent lectures, classes,concerts, art exhibits and other special events.

As an all-volunteer organization, we only check phone messages when we are there Saturday nights.

The Custer Institute had its roots long before it was formally established. Charles W. Elmer, co-founder of the Perkin-Elmer Optical Company, and an avid amateur astronomer and scientist, would invite and meet with his astronomy friends, including his future partner Henry Perkin, in his home at Cedar Beach, most every weekend.

Finally, in 1927, this group of friends decided to formalize their camaraderie and shared interest by establishing an astronomy organization. Charles Elmer's wife May, whose maiden name was Custer. To honor the many years she had been their gracious hostess at their weekly informal gatherings, this newly organized band of amateur astronomers chose to call themselves the Custer Institute.

In 1938, the group purchased the land the institute presently occupies and construction of the main (northern) building was begun. The new meeting place was completed in the spring of 1939.

In 1942, the Custer Institute, Inc was incorporated as a non-profit educational corporation in the State of New York.

In 1945, the southern second building, later dedicated in 1954 as the Dr. John W. Stokes Hall in honor of this long time member, was added with its seating capacity of 100+. It was at this time that Custer Institute began an aggressive schedule of both astronomy related and cultural presentations for the public. Though Southold was still mainly a farming community, these events usually played to an SRO packed house. This tradition continues today and has been expanded by adding the yearly Spring Family Astronomy Day and the Fall Custer Astronomy Jamboree.

In 1947, through donations by Charles Elmer and Mr. Polk, the 3-story tower and dome were built.

In 1954, Charles Elmer passed away. That same year, the Institute added the shed, which houses three sliding roof observatories.

In 1984, member Jeff Lichtman obtained a 3 Meter Satellite TVRO Dish and proceeded to do Radio Astronomy experiments at Custer. Jeff went on to become the founder of the Society of Amateur Radio Astronomers, which today is an international organization with approx. 400 members worldwide.

During the early years through 1950, the membership of the Custer Institute boasted a number of world famous people. The list included David Rothman, Henry Fitz, and Dan Eichner. Today, the membership rolls continue the tradition with members like Phil Harrington author, Richard Berry author and past editor of Astronomy, and Dava Sobel author to name just a few.

In 2006, Custer's observatory was crowned with a brand-new 22-foot galvanized steel dome. You can see the dome raising video here. 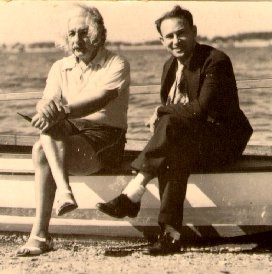 In the summer of 1939, Albert Einstein spent his summer on Nassau Point, in Peconic, NY on eastern Long Island. He was on vacation to get some peace, spend some time sailing, and to have some quiet time to think before writing a very important letter (link below).

Einstein wandered into a local shop to buy summer beach sandals. The shop was owned by David Rothman, a past Custer President, who, as you can see in some of the photos, ended up selling him some sandals (albeit, somewhat feminine-looking!) As pointed out earlier, Rothman had been a past Custer President, and as such, this is the only Einstein tie-in with the Custer Institute.

Since the day the odd-looking sandals were purchased, Einstein often found David Rothman on the doorstep of Einstein's rented cottage in Cutchogue. As one would expect, it was Rothman who did the visiting and not the other way around. They would walk the beaches and wooded paths (donning the lovely sandals) near Einstein's summer rental home, a few miles from what is now the King Kullen in Cutchogue.

Not about to let an opportunity pass him by, Rothman had arranged for several publicity photos to be taken while he walked and talked with Einstein; several of which you can see hanging in the Custer Institute and local history collections.

Look carefully and you'll notice that none of the photo ops were taken at or around the Custer Institute. After a bit of research, you'll find it's not so odd since Einstein never visited the Custer Institute. Never set foot on the property. Only the photos, taken elsewhere, made it inside Custer. This will make more sense when you learn that Einstein's interest was not in the peering through physical telescopes but more in the theoretical side of how the universe worked. The phrase"Einstein's telescope" has more to do with gravitational lensing.

So, other than some word-of-mouth stories, and very wishful assumptions told and retold a thousand times over, there is absolutely no hard evidence -physical or valid primary sources- what-so-ever, that Einstein ever visited Custer. Never. Period. And that's ok. The work we do here and the things we share are built, in part, on Einstein's ideas and not wheather or not he set foot on the property. Which he didn't. Just saying...

However, for something far more importnat (not to mention true) while staying in Peconic, Einstein wrote an important, and famous, letter to F.D. Roosevelt.

As a footnote, I will add that George Washington also visited Southold and as far as we know, did not buy ladies sandles while in town or camp out on the property that would one day become the Custer Institute, or have his portrait painted by fan boys. As Einstein, Washington too, had a war on his mind.